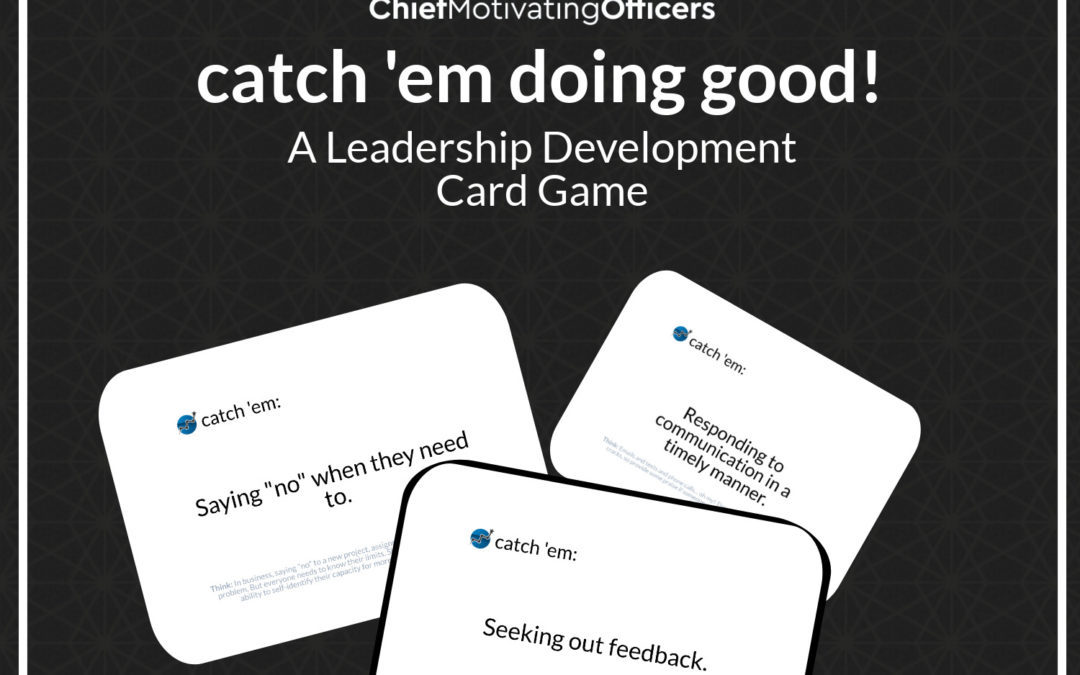 For Cyber Deals Week 2018, we’ve launched our official web store! The first item available is our Catch ‘Em Doing Good Card deck, which we featured in a previous blog when they first launched. The original blog discussed one strategy for using the cards as a leadership tool to help prompt supervisors to watch for and reinforce positive behaviors at work. Today, I want to tell you about a different way to use the cards as a training tool for groups of leaders and supervisors in a game we fondly call, “What’s the Catch?”

If you’ve seen us at a conference, you’ve probably seen groups of people playing a game with us, and it looks a lot like this:

Actually, it looks exactly like that. During FABA 2018, groups of friends would come back to the booth to play over and over! So what is happening here, and how can you replicate it with your team?

First, you shuffle the deck of cards, and deal a hand to each person. In smaller groups, I give 5 cards, and in larger groups, I try to give 3 cards when possible. This allows for people to have options of potentially “easier” cards as they are becoming better at the game. Don’t show anyone else your cards!

Three criteria must be met in the interaction. The player must describe:

In order for the player to keep the card, the person they selected to role-play with must be able to identify the behavior written on the card. This ensures that the interaction was clear, not misinterpreted, and is a key component of a quality feedback interaction!

If the person (or sometimes we open it to the group) can name the catch, the player gets to keep their card. If they can’t tell what behavior they’re reinforcing, they put the card in a discard pile. Either way, they select another card from the deck, and gameplay continues clockwise.

This is for positive feedback, reinforcing the behaviors on the card. To practice constructive feedback, before beginning gameplay, each player will have to determine the “opposite” behavior of what is on the card; the inappropriate alternative they could engage in instead of the behavior we want to see. This makes the “now what” part even more crucial! And when it comes to the guessing part, the person should state the behavior that you want to happen, not the inappropriate alternative.

And that’s how you play “What’s the Catch?”! We always have fun with this one in groups, and people develop fluency really quickly!

Grab a deck of Catch Cards here! (And use code CYBERWEEK2018 before december 1st for some great savings!)  And if you have any questions, feel free to email me, shannon@chiefmotivatingofficers.com, and we can schedule a 15 minute meeting to help you learn to play!